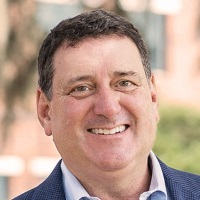 A recognized leader in economic development and site selection, Gray Swoope is President and CEO of VisionFirst Advisors. After a successful 30-year career in economic development, Gray launched VisionFirst in 2015. In just four short years, the firm’s clients include five Fortune 500 companies in a variety of industries including data centers, automotive, manufacturing and distribution. Prior to starting VisionFirst, Gray served in Florida Governor Rick Scott’s administration (2011-2015) as Secretary of Commerce and President & CEO of its public/private economic development organization, Enterprise Florida. Under his leadership, Enterprise Florida elevated its economic development presence and delivered the best results in the organization’s history. Florida announced competitive project wins during his tenure that included Amazon, Bristol-Myers Squibb, Hertz, Navy Federal Credit Union, Northrop Grumman and Verizon. Before joining Governor Scott, Gray served as Executive Director of the Mississippi Development Authority (MDA) under then Governor and current VisionFirst board chair, Haley Barbour. During his tenure, Gray played a vital role in recruiting companies such as Toyota, PACCAR, GE Aviation and SeverCorr (now Steel Dynamics).